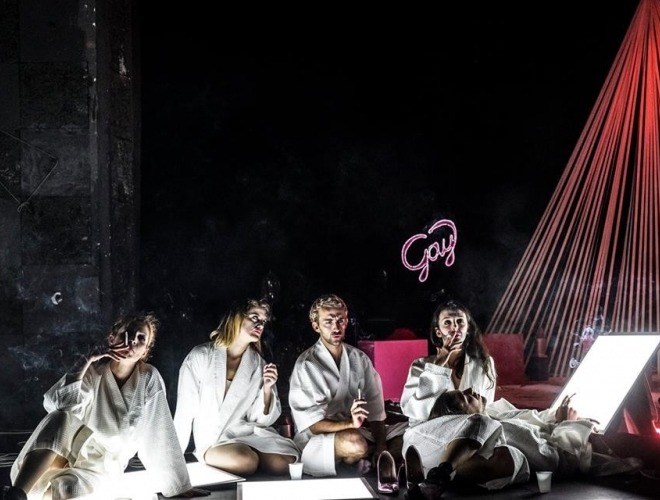 The Qendra Multimedia, based in Prishtina, considered to be”one of the most interesting theatre companies in South Eastern Europe” [kazaliste.hr], brings on stage, once again, in a completely politically incorrect treatment, an entertaining, political and provocative performance, this time about the LGBTI community.

55 shades of gay is a burlesque story about LGBTI politics in the Balkans and Europe. Local Balkan politicians try to manipulate and deceive EU officials, the humanitarian mercenaries of international NGOs often exploit the homophobic environment to raise funds, so they can implement their social and educational projects [such as workshops and seminars on how to use condoms], while EU officials, using their superior financial and political position, try to subjugate everyone.

In this trinity [Manipulation. Abuse. Subjugation], the question posed by the play is as follows:

Is sexual liberation possible in the Balkans? Or, could the Balkans start a ‘Balkan spring of sexual revolution’?

In the play, a gay couple apply to get married in a conservative provincial town which is deeply homophobic. They make their request at a time when the Italian association Don Bosco has begun building a condom manufacturing factory in the town, a project that is financially supported by the European Union and is intended to alleviate unemployment, which in that town is as high as 90%. Intellectuals, artists, politicians, religious leaders and professional grenade launchers try to stop the marriage from happening, despite the fact that same-sex marriage is permitted by the country’s constitution, which the prime minister signed according to EU instructions.

55 shades of gay is performed by a cast of 5 brilliant Kosovar actors and produced by an eminent team of theater artists from Germany, Kosova, France and Serbia.

Qendra Multimediao is supported by the European Union Office in Kosovo