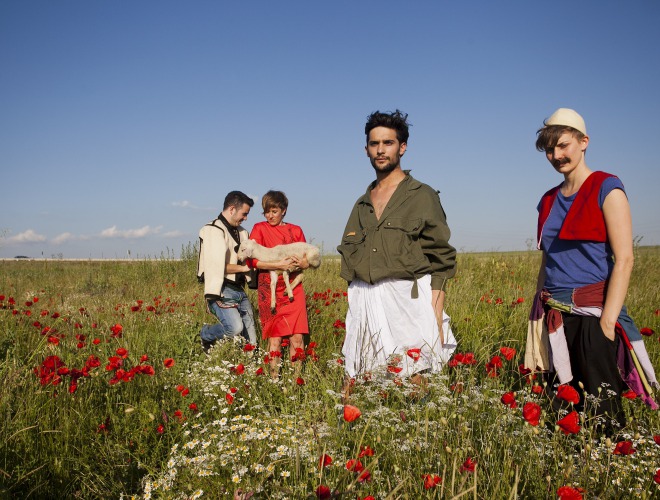 *** SHORT DESCRIPTION OF THE PERFROMANCE ***
"Kosovo. Where is it actually? Just somewhere in the Balkans. Here the interest about
Kosovo is from average till not at all. The word itself already sounds like the hearth
of war or as a toothless old man, so that you can not except something else than
to imagine hopelessness. And also no one thinks that "down there" will be anything
developed so quickly. What can be developed over there, they don't have anything.
That's why they come to us. It's time to get to know youngest state in Europe. "LOVE.
STATE. KOSOVO" is a tracing journey, a search of traces in a very complex creature
of the state of Kosovo. The starting point of the project is a personal vision, perhaps
naive Western European of the complex political and social events of a new country.
Fleischlin and Schupp visited and startet their tracing journey in Kosovo in June 2012. A
new place, in every aspect: The average age of the population is 27 years, only in 2008
Kosovo has declared its independence and further accepted by slightly more than half
of the members of UN.
With their own sight Fleischlin and Schupp have observed the complex political and
social events in Kosovo and have found a place, which has a very special connection
with Switzerland and Germany and so it does not have anything to do with the general
prejudices here. Their impressions and experiences they have elaborated artistically in
a joint working process with the Kosovan performer Astrit Ismaili and the dancer Labinot
Rexhepi. LOVE.STATE.KOSOVO reflects the personal view of the four performers in
Kosovo and their dealings with the prejudices and thematizes with a wink the pulling
and facing of the limits of the artistic collaboration.
LOVE. STATE. KOSOVO is some kind of a love story. But it's complicated!
Financed by: Department of Culture Basel, Pro Helvetia - Swiss Arts Council, Ernst
Göhner Foundation, Migros culture percentage, Landis & Gyr Foundation, GGG Basel,
SIS Foundation.