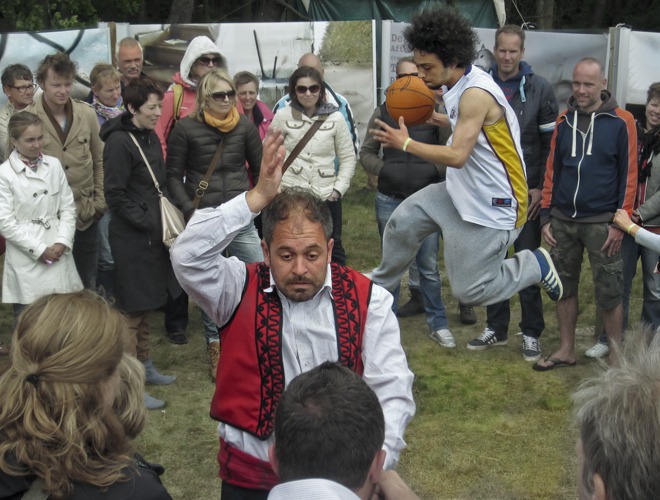 A unique theatrical experience of joy and sorrow existing between invisible walls. You are given a passport to access this journey made from Kosovo's real life.
"Invisible walls" is a remarkable story of people trapped, in isolation, surrounded by invisible walls.  The stories told of war torn Kosovo are drawn from the real life experiences of the actors and their friends and families. The audience are provided with passports that take them on a touching and sometimes intimate experience where they discover the isolation and physical and psychological pressure, the impossibility of enjoying basic human rights and the joy of small freedoms. A truly international production supported by the IN SITU network "Invisible Walls" was devised by the company in collaboration with artists from the UK, France and Austria.  It was premiered at the Oerol Festival Netherlands to critical acclaim.

"It is something we never experienced before. Very close communication with actors" Koha Ditore

The material that was the core of the work was an experience that was brought into the work by actors and their previous experiences. Some of the experiences are theirs, while other experiences are of people they know. The material was used to artistically develop situations of physical and psychological restrictions. This journey is based on real situations of isolation, from impossibility to freely move enjoying basic freedom rights, through the threats of physical existence when exposed in public to the situations being trapped because of bureaucracy, prejudice or fear to leave invisible walls, if not created for us, created by ourselves.

" The joy and sorrow. It made ??me laugh, I danced, but it grabbed me in my throat how easily freedom can be limited and how anxious that is. In half an hour we experience a bit of what it is to live like that" cultuurpodiumonline.nl

"I would like to thank you for your touching production on Oerol, last Sunday. It was especially afterwards that I realized and felt the impact it had made on me. I was really touched. It was very beautiful and brave of you to use your own experiences and other persons' experiences and make us part of this experience, which must have been really traumatic at the time." Annemieke Schoemaker, Oerol, Netherlands

"Invisible walls" - Teatri ODA production designated for public space is produced in collaboration with IN SITU - a European network for artistic creation in public space, where ODA is the only member outside European Union. The project has been developed through 3 artistic residencies we had in Prishtina, Kosovo , in May and October 2012 and May/June 2013, it was then developed further and presented in Netherlands in Oerol Festival.

This production has inspired the network IN SITU to dedicate this theme for the network for a full year. More in: http://www.in-situ.info/en/publications/les-tires-a-part-din-situ/13/murs-invisibles/20

A 4 minute video trailer of the show: http://youtu.be/5Ee1XkqvDuI

"Invisible walls" has received a Residence Aid by the IN SITU network in the frame of the META 2011-2016 project.  This project has been funded with support from the European Commission (DGEAC - Culture programme).

â€œInvisible wallsâ€ is supported financially by European Cultural Foundation, Ministry of Culture, Youth and Sports, Prishtina Municipality and â€œCulture for allâ€, An EU funded project managed by the European Union Office in Kosovo

"Invisible walls" presentations in Edinburgh Fringe has been made possible with the contributions of: